EIFFEL partner Universitat Politècnica de València (UPV) will contribute to the project by exploiting GEOSS data potential, the biggest observation system on Earth, in order to tackle climate change. This mega-system includes millions of open data items on different Earth Observation parameters, aggregating international, national and regional data providers, such as the NASA and the ESA. 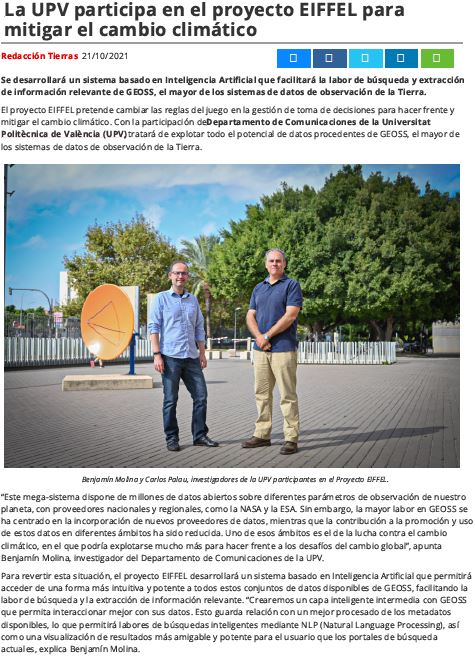 However, GEOSS has mainly focused its work in engaging new data providers, whereas the promotion and usage of such data from different stakeholders has been incremental. One of the areas to exploit data, relates to climate change and available data could be better utilized to meet global climate challenges.
In order to cope with this situation, the EIFFEL project will develop a system based on Artificial Intelligence that will allow a more powerful and intuitive access to those GEOSS datasets, facilitating search and retrieval functions.

The project will develop a new intermediate intelligent layer that will process better available metadata and will therefore allow NLP searches, together with a more powerful and user-friendly visualization of data results.

Pilot project in Spain to reduce the environmental footprint:

The EIFFEL project will produce 5 pilots with applications centered on the fight against climate change in terms of mitigation and adaptation measures. UPV participates in the Spanish pilot (3), together with the Valencian company Prodevelop and the Balearic Port Authority, in the development of a monitoring and prediction application for atmospheric pollution which will allow to reduce and better manage the environmental footprint in the port of Mallorca.

Besides, the UPV team is responsible for the creation of an ontology which will allow the incorporation of new search functionalities in the GEOSS database; this will also facilitate the NLP mechanism as well as the visualization of results.

Read more at (in Spanish):